Modern Slavery and Human Trafficking: Does Tech Help or Hinder?

Tech Against Modern Slavery was an event in aid of World Day Against Trafficking in Persons, to raise the profile of modern slavery and human trafficking and explore tech's role in addressing the issues.

“Tech Against Modern Slavery” was an event in aid of World Day Against Trafficking in Persons, ran in partnership between Free_D and the London Tech for Good Meetup to raise the profile of human trafficking and explore tech’s role in addressing it.

The event explored tech’s role and responsibility in the prevention, prosecution, rescue, and reintegration of human trafficking and modern slavery, from the perspectives of charities, startups and big tech companies.

According to the UN, human trafficking is a crime that exploits women, children and men for numerous purposes including forced labour and sex.

While it is not known how many of these victims were trafficked, most agree that a large portion of this number are victims of trafficking.

During the event, we heard talks from Siavash Mahdavi, co-founder of Free_D, and Phil Bennett, Program Architect at Salesforce.org.

There was also a panel discussion featuring:

Here are our notes from the talks.

There are an estimated 35 million slaves worldwide, 14 million are in India. Every year, 600-800,000 people are trafficked across borders. About 76% are women and children.

Girls can be taken as young as 10 and often are taken straight go into brothels.

If they are saved, they go to a shelter, but regularly, are unable to return home. Their families may have sold them into slavery in the first place.

Education is key. There is a strong correlation between illiteracy and trafficking, 70% of trafficked girls in India are illiterate. 40% of victims that get trafficked are later re-trafficked. Lack of opportunity and education is a problem as long term support is rare.

Prevention is key, but it feels to many like wishful thinking. Prosecuting brothel owners and traffickers helps, but so does educating judges, the police and other social workers.

Free_D works with previously trafficked people to design and create fashion and jewellery using 3D printing so they can move into permanent jobs.

Recently they ran a proof of concept by going to several safe houses and showing them how to design for a 3D printer.

This is part of Free D’s current focus rehabilitation, protecting people from being trafficked again. They try to provide them with a career that they can earn a living with and pick up skills like mathematics, IT skills and literacy.

Currently, it starts with fashion and jewellery, but this could expand to healthcare, automotive and architectural applications.

Sia also mentioned a site called How many slaves work for you? A call to arms, the site breaks down your own personal impact on the trafficking industry and is worth a look.

Human trafficking helplines like Polaris and Unseen offer various channels to raise the alarm for victims, including email, text and phone calls.

Unseen is the UK modern slavery helpline. When people call the helpline, their case is recorded in the Salesforce CRM and can be managed from there.

The Unseen helpline is a model, which Salesforce can “save” and roll out to other organisations. This means that other NGOs in other countries can use the same technology instantly, showing that the application can scale.

This model includes the data management aspect, but also the behaviours that go into helping a survivor, such as support and rehabilitation.

The data associated with each case can be used to gain more insights, tools and practices, such as developing a model for signalling when someone shows signs of vulnerability or is at risk of being re-trafficked.

Technology will help, but the Indian government needs to step in to help, through education, economic empowerment and supporting social enterprises who can help on the ground.

Phil also recently wrote a post on the Salesforce.org blog that explores their work with human trafficking in India:

“Recently, UK’s National Modern Slavery Helpline was launched to combat trafficking and slavery in the UK. Its purpose is to provide an easy way for anyone to get help, advice or report suspected slavery in the UK. I have the privilege of volunteering with Unseen who are the UK organisation operating the helpline. We developed the Salesforce Service Cloud solution to handle the case management and referrals for the helpline. In the future, we expect the data collected to paint a picture of the UK’s slavery and trafficking activity. This will enable authorities to target resources more efficiently. It’s why we spend significant time on the data model and analytical components of the system to ensure we maximise its emergent benefits.”

Tech is also used to facilitate human trafficking. When we talk about tech and how it can be used, we’re also talking about criminals in orchestrating modern slavery.

Fairly obvious examples are the use of mobile phones to track potential victims. If they’re being forced to visit certain places, the criminals can keep track of where they are.

The web can be used to recruit victims. Adverts for jobs in the UK promise a brilliant life, but when victims arrive they are trafficked and exploited.

With live streaming criminals looking to exploit victims can do so from the comfort of their own home. There are even sites where you can rate the level of abuse that is being depicted.

End to end encryption is a hot topic at the moment, as apps like WhatsApp are used by criminals to discuss trafficking, but the government can’t access these conversations. The exploiters and traffickers are always three or four steps ahead.

We need to ask not just how big data can help trafficking victims, but also how criminals are using it to do more and more harm.

It’s hard to estimate how many people live in slavery, but we’re trying to use tech to get a global picture, including where it is happening, who are the most vulnerable, what are the indicators of someone being trafficked and more.

The key thing is sharing these insights with other stakeholders across the world, including NGOs, governments, businesses and banks. We can’t work in silos and have to work together.

Our ultimate goal is to use empirical data and artificial intelligence to go from recording trafficking now, to predicting trafficking in the future. The danger we face is that we just disrupt the problem, instead of ending it. Traffickers are always a step ahead.

You can find out more about Tech for Good and future events on their website. 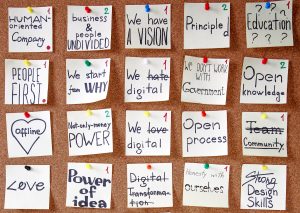 A handy charity glossary full of nonprofit terms and definitions. We hope this helps you decipher all the sector jargon!

Custora have published a new research report about Mobile Shopping in the US, finding that Social Media advertising isn’t working for mobile shopping – but